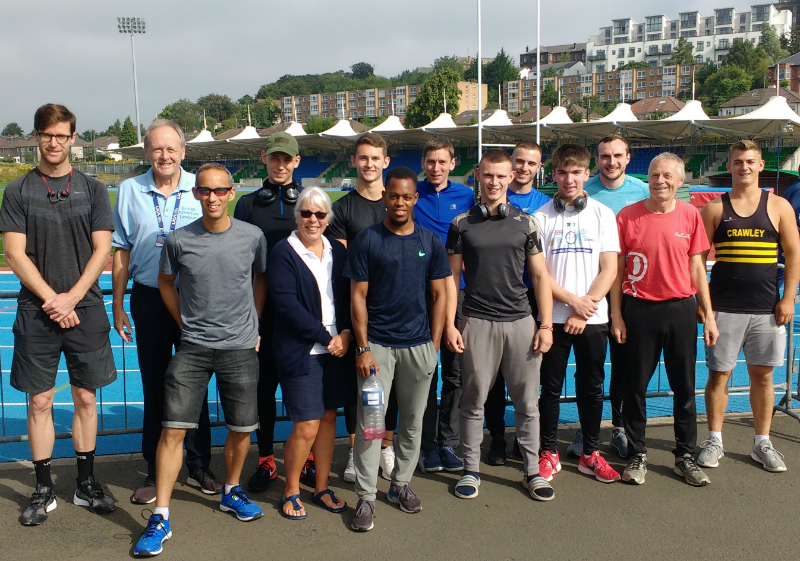 The Crawley men had some excellent performances in the final round of the British League at the Scotstoun stadium, Glasgow to help protect a fourth place overall finish and secure a place in National Division 2 for next season.

The team got off to a great start in the opening track event, the 400m Hurdles. Sam Shore sealed a second place finish with a time of 55.55sec.

There was some fine sprinting from the Crawley team with Ishmael Smith-John (11.19sec) and Joe Massimo (11.31sec) both securing an excellent third place finish in the 100m. Massimo went one better in the 200m clocking 21.90 sec to finish second.

Quarter miler, Matt overall again had another quality run in the 400m to take second place in the A clocking 48.41sec. Pole Vaulter George Turner stepped in to cover the 400m B string with an impressive 50.86sec to secure a third place finish.

There were solid runs from the distance squad with Howard Bristow in the 5000m (16min07sec) and in the chase Rob Creed (12min.08 sec) and Tim Ellis secured a sixth place finish.

Elsewhere in the field the throwing events got off to a good start. Matt Lasis was again in good form to finish second in the Hammer (50.82m) and George Skevis scoring good points in the B with a fourth place finish (34.36m). Next up was the Discus where Lasis recorded 39.01m to finish sixth and Skevis 33.20m to take fourth in the B. The throwers capped off the afternoon in the Shot. Lasis finished fifth with a Putt of 12.59m and Skevis recording 9.10m.

Parallel to the throws the PoleVaulters were in action. George Turner made his first BAL appearance this season to finish second with a 5.00m vault. William Snashall was again in good form to finish second in the B with a 3.80m vault.

U20 athlete Jack Woodford made his BAL Debut in the Long Jump just short of his personal best with a leap of 5.84m.

The afternoon was capped off with an impressive display in the Javelin. Scott Staples lead from the first round with a 65.25m throw until his team mate Marcin Balun launched a massive 66.68m in the final round to seal victory. Marcin was delighted with his new personal best performance and helping secure  maximum points for the Crawley team with a combined double victory in the Jav.

Man of the match went to Rob Creed who stepped up to cover four events to secure extra points for the team.

The final league standings were

The Crawley Men were rewarded with securing another year in top class competition in the National League Division 2 for next season.