Thanks to Google and Manxathletics.com!

Dave Cowell recalls the build up, the race and the recovery from his Manx record of 2 hours 23 minutes 34 seconds which has lasted since 31 January 1974 - (still the Crawley AC record too!)

My training mileage increased steadily from 1970 to 1974 as by 1972 I realised that I might stand a chance of Games selection if I could work hard enough. I had only run one marathon before Christchurch – the Harlow marathon 27th October 1973. This was used as a selection race before the Games of 1974 Finished in 2-34 for my first attempt – I was panned!! It was a BIG marathon for the day – 200 finished and I was 34th. I always say that in the 70’s there was only the odd marathon, all Club runners, and anyone finishing slower than 3-30 would get a bollocking from the officials for finishing late! I did 50 miles for the week with Thursday as my only day off but I only ran gently that week. To show how clueless I was, I had run 95 miles the week before – so much for tapering! During that pre-Games 12 months, I had done about 3,500 miles, roughly 70 miles per week average. Much of that had been in the summer track season and was very much quality work (a good and random example was an August week 1973. Total 55 miles, including 12 x 150 on a slight uphill Monday, 8 x 150 Tuesday, 8-10.4 3,000 at Crystal Palace Wednesday, 17 on the road Thursday, 5 Friday, 8 Saturday, and 10 x 300 Sunday).

Interestingly,the IOM had entered me at the Games for Marathon, 10k, 5k, and steeplechase. All these because I and the IOM organisers were not sure which would be best. I had only run three 10k's before the Games, and my best 5k was 14-34. Had never run a ‘chase! I chose the 10k and marathon at the Games because they were finals. Even more interestingly, a member of the IOM team management whilst in NZ was adamant that I had to run all of the races I was entered in – a super example of “I’m the boss, even if I know nothing about the thing I am bossing”. My year before the Games in Feb 74 was marked by non-injury, a very unusual situation for me as I seemed to go from one injury to the next. I NEVER stretched (could just get my hands half-way down my shins when trying to touch my toes), and NEVER did core strengthening work (I have better core strength now at 67 from yoga, pilates, and gym work than I did then). I remember the race very well; everyone had been worried about the warm, wind that can strike but it was OK. I do remember VIVIDLY the night before, when I didn’t sleep very well, half thinking how super it would be to see the Manx Flag somewhere amongst the podium flags. My only plan was to pace the race correctly; first 10k was 15-40, 20k in 64-20, and 30 k in 99-00. My inexperience shone through then, as I blew up a bit and covered the next 10k in about 38 minutes or so! My half marathon time in the race (about 67-00 minutes or so) remains the fastest half marathon I ever did!

I do remember passing Ron Hill (who had a heel injury and did well to finish), and I ran the last five miles or so DESPERATELY wanting to visit the toilet and not just for a minor reason- that was definitely a "low point"! I also ran the last five miles completely on my own, as only thirty four athletes started and (I think) twenty three finished. I finished 13th. The London marathon thousands are a little different now! Amusingly I was selected for a random drug test (with so few finishers the odds were quite high). Needless to say after a marathon, they had to wait a while! I couldn’t walk very well immediately after the race and Derek Harrison had to help me off the track through the under-track tunnel back to the changing rooms. I had a bath that evening in a block of accommodation opposite our billet – we only had showers. I soaked luxuriously for about an hour. When it came to getting out of the bath, I couldn’t move! I shouted for Steve (Higgins, my room mate) to come and help but he couldn’t hear. Eventually I hauled myself out onto the edge of the bath, rolled sideways, and crashed to the floor! Next day I managed to walk/jog half a mile.

Only one more marathon

I ran one more marathon, but only as a keep fit exercise in later years. Following the Games, I was stupid enough not to have a complete break for a few weeks, and trained really hard to take advantage of my new levels of fitness. I was well ahead of my previous year’s times and in April I won a winter track meet 3k at Crystal palace (8-20) and also in April ran a 1-57.0 800m for the Club. Sciatica then struck and affected me badly for two years. It also recurred whenever I tried to get back to those levels of running. I could run about 30 miles per week but not really match my best times with that mileage.

Growing up in the Isle of Man

I always ran and played football as I grew up on the Island, but after PE College in Chester, I took up running seriously with Crawley AC in Sussex (I think I still hold the Club marathon record for them!). In the 70\'s, we all ran track in the summer and cross country in the winter. Clearly defined seasons, cross country - road relays - track - road relays - and back to cross country again. There were few road races, and the most common distance was 10 miles. A 10 mile road race would be won in 48 minutes or so (my best was 49-04), and all the runners were Club athletes. The jogging boom arrived later. Summer track training was for Inter Club events where I would commonly race anything between 800 to 5,000m; usually 800/1500, or 1500/5,000. Graded 10 k meetings at Crystal Palace were the odd chance to run longer distances on the track. A common mileage in summer would be 40 to 50 miles per week (and about 20 - 25% of this would be quality track sessions), winter would be 80 plus. It is what everyone would try to do.

My first PE teacher (George Southern) at Ballakermeen School in 1959 first inspired me to run by introducing us to cross country and leaping into the river as part of the XC course - I thought "That is the sport for me!" Huge fun.

After joining Crawley, Tony Weeks-Pearson was an inspiration for all of us, and he had run marathons. My “kick up the arse” moment came in 1972 when, expecting to do well (i.e. win) in a reasonably big x-c race, I finished 32nd. The next day I started training twice a day for four days of the week. 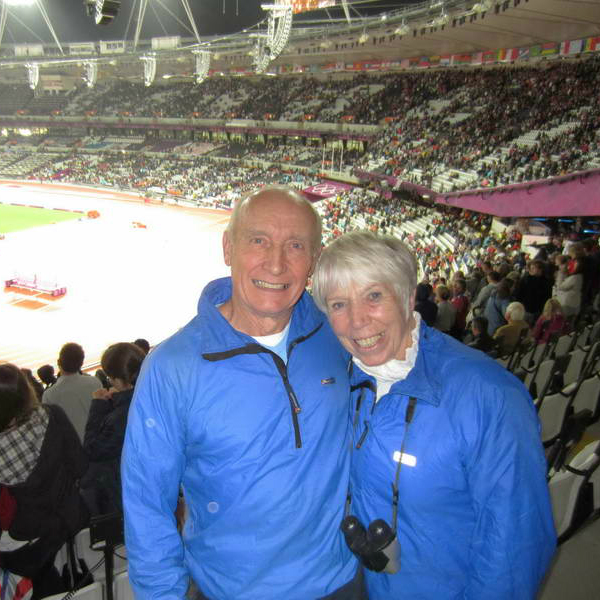 Dave with wife Kath at the 2012 London Olympics

(Next section is because I was asked for training tips!!)

I am a very inexperienced marathon runner so my tips would seem to be slightly arrogant! I suppose that the best tip I had was seeing the training that Ian Thompson did (who won the Christchurch marathon in 2 hours 09 mins 12 secs ). I read that he did 27 mile runs once a month, so I did that three times before the Games. My times for the training runs dropped from about three hours to 2 hrs 45 mins the month before.

Cannot run now, arthritis in my right knee. People always say "That will be the running" but they have little answer to my response that "the left knee did just as many steps!" It is more likely to be old football injuries in my youth (could I sue Gyms and Braddan? – only joking!)

Final thoughts are that the Commonwealth Games experience was amazing, and I was so grateful to the Isle of Man, the 60’s, Crawley Athletic Club, and the attitude to sport at that time. I grew up running, kicking, hitting, (played for the Junior Island football team, was voted Young Cricketer of the year at 16). I generally did what EVERYONE did. I and many others owe HUGE thanks to the individuals who stood every weekend officiating (Fred Ward, as a superb example)

I can remember one occasion that changed my approach to running, when Maurice Herriott (it must have been about 1964) did a group session at Ballakermeen. I was 16, and it was “training on the whistle”. Bill Kelly and some of the senior Island athletes were there, and as people dropped out of the session (sprint when the whistle blows, jog when it blows again, repeat ENDLESSLY). I was going cross-eyed by the end but still hanging in there. Denis Watts – AAA coach who was with Maurice – said to my Dad that “that boy could be a fine runner”. It is amazing how a few words of encouragement from a well respected source can swell you (and my Dad!)